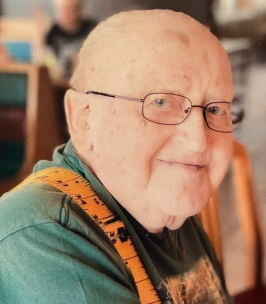 Born on January 2, 1934, in McAlisterville, Juniata County, he is a son of the late Joseph Emory and Grace Ophelia (Bay) Lauver. On November 13, 1955, he married his surviving wife, Lorraine Mae “Rainy” (Potter) Lauver, with whom he was blessed to share over 66 years of marriage before his passing.

In addition to his parents, he was preceded in death by two brothers, Roy Lauver and Wayne Lauver making him the last of his generation.

Mr. Lauver was a 1951 graduate of Fayette High School in McAlisterville and honorably served our country in the U.S Navy during the Korean War where he spent most of his military career in the Philippines. During his tour of duty, he was also stationed in California where he was a photographer and got the chance to meet several celebrities. The movie, "Don't Go Near the Water" was filmed on his ship and he had the opportunity to be a part of the film's crew.

He had previously worked at Standard Steel in Burnham, Washington National Insurance, and Gwen Fashions before becoming employed and retiring with over 20 years of service as a Custodian with the East Juniata High School in Cocolamus. He touched the lives of many students during his years at East Juniata and students would always look up to Red if they needed anything.

His membership included the Trinity Evangelical Lutheran Church in McAlisterville.

Red had always had a love for music and at age 4 was asked to be part of the town band. A suit was made for him to match the band members and he would ride a float, playing a drum, to "march" with them. The suit he wore can be seen at the Juniata County Historical Center.

Funeral Services will be held at 11:00 AM, Monday, June 13, 2022 at the Trinity Evangelical Lutheran Church, 420 Main St., McAlisterville with Pastor Karen Ward officiating. Interment will follow at Hillside Cemetery in McAlisterville where full military burial honors will be accorded by the Juniata County Veterans Council.

A viewing will be held from 9:00 AM until the time of the funeral services at 11:00 AM on Monday at the church.

In lieu of flowers, memorial contributions can be made in Mr. Lauver’s memory to the McAlisterville Lions Club, 158 Lions Den Drive, McAlisterville, PA 17049